Financial Policies
Article Processing Charges
As Aerospace Research Institute has supported all of the publishing costs of Journal of Aerospace Science and Technology, article processing charge and any other publication fees in the journal are free for authors.

Subscription Fee
Journal of Aerospace Science and Technology has published as an open access electronic journal, so there is no subscription fee for audiences.

Open Access Policies
Journal of Aerospace Science and Technology is licensed under the terms of the Creative Commons Attribution License 4.0 International (CC-BY 4.0). Licensees may copy, distribute, display and make derivative works only if they cite the original published SES article.

Publication Policies
Journal of Aerospace Science and Technology is following of Committee on Publication Ethics (COPE) and complies with the highest ethical standards in accordance with ethical laws.

1. Design and sensitivity analysis of an EO mission's operating orbit in the absence of injection into the Sun-synchronous orbit

2. Investigation and feasibility study of using components with different categories from the perspective of radiation damage in LEO and GEO orbits

4. Performance evaluation of a launch vehicle with non-turbopump propulsion system based on multidisciplinary analysis (MDA)

4. A method for determining the optimum parameter of the soft filters to image fusion in the frequency domain

5. Symmetric periodic solution around asteroid 216 Kleopatra and its stability in the presence of solar radiation pressure

6. Effects of geometrical parameters of a two-sided catalyst bed on flow and thermal fields of a monopropellant hydrazine thruster

9. Multi-disciplinary optimization conceptual design of the launcher based on non-turbopump propulsion systems

Articles in Press, Accepted Manuscript, Available Online from 16 May 2021

11. The Intellectual Property Rights and Transfer of Technology in Space Industry

Articles in Press, Accepted Manuscript, Available Online from 16 May 2021

16. Numerical study on the effects of nozzle geometry and creating swirly flow inside the injector nozzle on the performance of an engine

18. Developing a universal Software for the Conceptual Design of Cryogenic Rocket Propulsion System

20. experimental study of dynamic stability for a entry capsule in supersonic flow

21. Design and Simulation of Single Capillary Injector and Circular Injector Plate for a Monopropellant Thruster

22. Thermal Effects of the Space Environment on the Radiation Characteristics of a Reflector Antenna in LEO Spacecrafts

24. Optimized Dimension Design of Catalytic Chamber of a 10 N Thruster

25. Study of the effect of the microgravity on the expression of angiogenesis marker in endothelial progenitor cells

27. Experimental study of the effect of using space sandwich structures for protection against space radiation

34. Design of an nonlinear extended state observer to estimate unmeasurable information on the problem of flying objects guidance

38. Effects of Injector Pressure Drop on the Performance of a Monopropellant Hydrazine Thruster

41. Military use and arms race in space from the perspective of international law 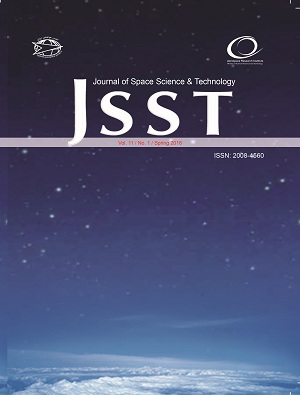